Two things in life excite me when it comes to planning. The first one is my favorite holiday, Christmas and the second, is traveling somewhere new every year. My new years resolution every year is to travel to one place I have never been. Whether this trip is domestic or international it doesn’t matter, but it allows me to experience different cultures, people, traditions, and I am forever grateful for the life lessons I gain throughout these journeys.

For those who know me well know that I start decorating for fall in the month of September. Yes! I know that’s early, but hey pumpkin spice lattes were released on august 31st, so technically I am allowed to start early. When I was talking to a patient of mine in the chair one day about how I love Christmas and I set up my decorations early she simply asked me if I have ever planned a Europe Christmas trip, and if I had visited the Christmas markets in Europe. I was silent for a few minutes and replied is that a thing? She laughed and said yes they are known for their Christmas markets and since you love Christmas and traveling you should consider going. After that I went home to my computer and began my search for the Christmas markets in Europe. My goal was to make my dream become reality.

Out of the top ten Christmas markets In Europe listed online I decided to visit Vienna, Budapest, and Prague.

We chose Le meridien hotel because:

My Experience In Vienna:

Believe it or not the entire trip aside from the restaurants listed we ate at the different Christmas markets we attended. The Christmas Markets had a variety of delicious sausage sandwiches, Baked goods, hot cocoa, chocolates, chestnuts, potatoes, jams, and hand crafted ornaments. We couldn’t get enough of what they had to offer. What I enjoyed the most was that every Christmas market had a different variety of foods, and Christmas décor items.

The one thing I learned and experienced in the markets was that every other stand was selling hot wine known as “ Mullen Wine” or Glühwein Apparently it is locals most favorite and seasonal drink. “Mulled wine” was first originated by the Romans. The Romans would heat up the wine to warm up their bodies against the cold winters. It’s a mix of wine and many great smelling spices. Later the tradition spread across Europe.

I can go on and on about the Christmas markets in Vienna, but what I will share with you are that every market is decorated like gingerbread houses covered in Christmas lights. You truly feel the celebration of Christmas when in Europe.

Must See Historic Attraction’s in Vienna:

We spent four days in Vienna exploring the city but also enjoying the amazing Christmas markets during winter of 2017. It was like being in he hallmark Christmas movies i couldn’t get enough of. However I have to say it was definitely not enough time. My journey in Vienna has not yet ended… 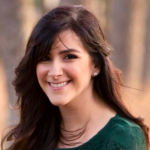 I started my blog to share the love of health, skincare, traveling, and food with not only my friends and family, but to all the people out there. I look forward to sharing my journey with you.